We use, we bake and we eat cookies. By browsing our site you agree to our use of cookies. Okay! Learn more

Jasper, our very naughty dachshund, was born on 13th September 2005 and joined our family when he was 12 weeks old. We decided to get another daxie after Oscar, our very first dachshund, passed away suddenly aged just 10 years old. Jasper came from a breeder in Wales and in early December Mark, my husband and I, made a long journey down to Bristol to collect him. 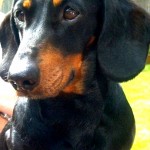 We met Jasper for the first time in a car park on the outskirts of Bristol. Filled with excitement as the breeder opened her car boot, we saw a lovely little dachshund wagging his tail. Unfortunately, or you could say fortunately for us, that was not our dog and the breeder reached in the back and pulled out Jasper who was half asleep and not very bouncy and waggy like the other one. Hiding my disappointment she said ‘This one is yours, he is called Charlie and loves his neck to be blown into.’ That was it, I was sold as Oscar had loved this too and so we took Jasper home and fell in love with him immediately.

We got home and introduced Jasper to the rest of the family, Francesca, our daughter who was 7 year old and our wire- haired dachshund called Pip. Jasper was very nervous but took to family life well in the Bell household and seemed to follow Pip around all the time. Pip, a very dominant dog, was the natural pack leader. On the first morning I fed the dogs together and Jasper made a move on Pip’s breakfast, all hell broke loose and Pip took a chunk out of Jasper’s head ! I ended up on that first morning taking Jasper to the vet for a check-up and he ended up with an antibiotic injection in  his bum! Anyway, this never happened again and all meals were eaten in harmony, although very quickly, as some daxie’s do.

From a young age Jasper has been known as ‘ASBO’ in our house. This came about when I had a visit from the local dog warden! Our dachshunds are the most pampered pooches around, they have 2 homes, one with us and one with my in-laws and are hardly ever left. I did leave the dogs to go shopping  occasionally, but they were never left for long and someone reported that my dogs had been barking all day. I found this very strange as they were hardly ever left. As it happened, it was not my dogs but another neighbours that were causing the noise but we laughed and said poor Jasper,’he has got an ‘ASBO’ at such a young age. ‘The name stuck and he has been known as ‘Jasper’ or ‘ASBO’ ever since.

Jasper has a naturally naughty nature. If there is anything missing in our house it usually means Japser has stolen and hidden it. He has a passion for tearing up paper and going in mine or friends handbags to see if he can find any sweets. There really are too many stories to tell and I hope to share some of the funnier ones with you over time.